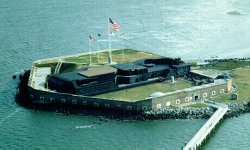 I recently visited Charleston, South Carolina where Tracy is busy learning about her new employer. Charleston is a beautiful scenic town, with a lot of great seafood restaurants featuring the local shrimp and she-crab.

Our one site-seeing activity was a visit to Fort Sumter. Fort Sumter is known as the location of the "Battle of Fort Sumter" of April 12 and 13, 1861, or more specifically, the first battle of The Civil War.

I found the story of this little island fascinating, and believe it to be thematically relevant to our present crisis. Fort Sumter is a man made island commissioned by the Army core of engineers directly in response to the war of 1812. It was in 1812, that the British had marched into Washington and burned the most symbolic structure of our government, The Whitehouse. Were it not for rain, the entire city of Washington might have burned. Subsequently, the US military began to examine it's vulnerabilities, and in particular begun to look for ways to address their lack of naval capacity, and the direct threat this presented to the internal safety of the nation.

A report by the Army in 1827 recommended that the government build an island in the middle of Charleston bay and erect a Fort there, because it would allow for bombardment of incoming ships approaching the city of Charleston in a crossfire fashion in combination from either nearby Fort Moltrie on the northwestern shore or Fort Johnson to the east. Thus began a thirty year project to move tons of grannite and shells as the basis of the island, and erect a pentagonal Fortress with walls Fifty feet high and twelve feet thick. Some 30 years later, like many a Federal project, the fort was overbudget, overdue, and still not completed in 1861, although it was certainly close to that state, and was partially armed and stocked.

Major Robert Anderson was the commander of the local garrison when South Carolina became the first state to seceed from the union, in response to the election of Abraham Lincoln as the first Republican President of the United States. South Carolina began the process of requesting transfer of federal properties and forts to their control, while an uneasy truce still existed between southern confederacy officials and lame duck president James Buchanan who hoped to avoid armed conflict, believing that mediation and compromise would keep the other southern states from joining the confederacy, and eventually draw the dissenters back into the union.

He did however, order Anderson to hold Federal properties, using his existing garrison (of only around 65 men, not counting the 12 or so musicians who filled out the ranks), an outlandish propostion, considering that the facilities in question were not forts, but rather installations for the purpose of bombarding foreign enemies who wished to attack Charleston by sea. On the evening of December 26, 1860 Anderson having been refused reinforcements, did the only thing he felt reasonable, and moved his garrison to Sumter.

A ballistics expert and instructor at West Point, he knew that the island would not be easily compromised, since it was built at a distance a mile and a half from shore at the limits of prevailling artillery technology of the day, and with walls constructed specifically to withstand shelling by incoming warships.

South Carolina immediately began to protest this move as an act of aggression and hostility, and seized all the surrounding facilities, leaving Sumter as the last encampment in South Carolina still under federal control. When an effort in january to resupply the fort was repelled by shelling from the shoreline forts, Sumter quickly became a focal point and symbol of the conflict in both the north and the south, along with Fort Pickens in Florida.

To local residents, and to the governor of the state, the occupation of South Carolina territory only three miles from Charleston was a slap in the face. While it might have been northern grannite that created the island upon which it rested, it was the bricks baked in southern plantation ovens, which built the walls of the Fort. And the Fort itself was of considerable strategic value to whomever controlled it.

The Confederate military opposition in Charleston was under the command of a New Orleans born ex-us army soldier General Pierre Gustave Toutant Beauregard. Beauregard attempted to negotiate for the peaceful surrender of the Fort in the months and weeks prior to the battle, and had every expectation of success, since Anderson was not only a fellow Southerner (born in Kentucky) and known to be sympathetic to the concerns of the southern states, but in fact was both a friend and mentor to Beauregard. Beauregard had been a student in Anderson's West Point ballistics class, and the two had fought together in the U.S.- Mexican war of 1846-1848. It was Anderson's Southern background and sympathetic disposition that had landed him his command in Charleston precisely because Buchanan knew Anderson would avoid conflict in every way possible. 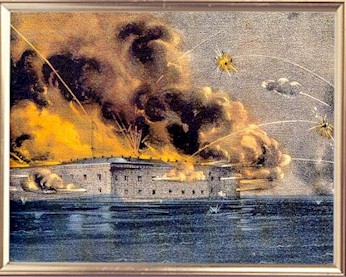 Having received word that Lincoln had dispatched a reinforcement operation to further entrench Ft. Sumter. Beauregard issued a final ultimatum that Anderson abandon the fort, and when he refused, began to shell Sumter from the surrounding Forts on April 12th. After a night of intense shelling, the fort was beaten but uncompromised. Unfortunately, being incomplete in construction and with only a few of the intended cannons installed, the Fort was not in a position to make much more than a token return of fire. On the 13th, Beauregard switched to "hot shot", solid iron shot, heated in a furnace. Hot shot furnaces were available since the purpose of this technique was to set fire to wooden ships. As the inner section of the fort was not entirely finished, it was the hot shot that set exposed wooden walls ablaze, and fearing that this would lead to an explosion of the powder rooms stocked full of gun powder, Anderson had no choice but to surrender after 34 hours of continuous shelling, where Fort Moltrie alone had fired 2500 some rounds at Sumter.

Though shaken, not a single casualty was sustained by Anderson's Garrison, and they were summarily evacuated to New York and arrived as heroes admired in the North and South alike for their honorable efforts in the face of overwhelming odds.

Sadly, Sumter became the kindling that ignited smoldering passions on both sides, leading to the secession of additional southern states, and the splitting of Virginia from it's Western region (creating west virginia) because of the desire of the majority of residents in that part of the state to remain in the union.

Public pressure to engage the southern states and force them back into the union lead to the Battle of Bull Run, Virginia on July 21st, and quickly escalated into what would become four years of intense bloody battles, 620,000 deaths in battle or from disease, and the assassination of Lincoln on April 14, 1865 only 5 days after Lee's surrender at the Appomattox Courthouse.

Through the course of the war, despite repeated efforts by Union Forces and a naval blockade, they were never able to retake Sumter, and it did indeed prove to be invaluable in guarding Charleston harbor from naval attack, and protecting the city of Charleston.
Defined tags for this entry: Charleston, Civil War, Fort Sumter, History
Related entries by tags:
Posted by David Rolston in History Comment: (1) Trackbacks: (0)

What's left of Fort Sumter can be seen through this webcam at www.charlestonscrealestate.us which gives internet visitors a live video view of Fort Sumter current state.... The webcam also captures other historical landmarks in Charleston SC. Viewers can also take control of the webcam through its panning and zooming features.