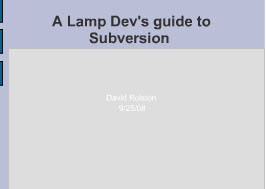 Here are the slides for the presentation on subversion I gave at the September 2008 LampSIG meeting. I hope some may find them useful, however they were meant only to provide a skeleton for the talk, and aren't a complete tutorial by any means. The following links to other sites were mentioned in the talk:

Defined tags for this entry: LAMP, LampSig, Subversion, SVN, Web Development
So the UML Coop has finally after 3 years of talking about it, acquired a new server from Silicon Mechanics. Read the rest of the article for the complete specifications. We will be moving off User Mode Linux (UML) and on to OpenVZ. This change will allow us to accept some new members to the coop, so if you're interested drop me a line.

I'll be talking about the Dynamic Scalable Vector Graphics (SVG) with Asynchronous Javascript and XML (Ajax) demo I created for the LAMPsig booth at the Southern California Linux expo 2006 (SCALE) conference that was held last weekend.

There were some excellent LAMP oriented discussions including Zend's Andi Gutmans himself, who talked about the PHP community project and PHP 6, then hung around for a while whilst myself and Chris Thompson peppered him with questions about MySQL's oop, its applicablility to the various framework projects underway. In short, Andi indicated that the PHP core team currently has no plans to add anything to the Oop capabilities of PHP 5, although I suppose that could change once the PHP Framework project matures. He indicated that the PHP Framework should be available in alpha or beta within the next few weeks.

Other LAMP hi-lights included Jim Winstead from MySQL AB who discussed new features in MySQL 5.x and provided some nice example code, and David Schecter from Sleepycat gave an entertaining talk that illustrated how integral berkely database is to Linux in general, and how its used by many major players to provide a high performance caching layer in front of oracle and mysql for websites like Yahoo.