In post Z news, The Synj has landed down in San Diego at Presto Studios, makers of the Journeyman game series and now doing a Myst title. Congrats Dan.

Looks like I'm gonna be playing some hockey down at Culver City with my old pal Ted Henning. He apparently has a new company Scream Therapy doing some interesting web entertainment stuff, including animated horror episodes. It's a heavy flash site, FYI. If any x-z.comers want an intro let me know. Check out some of their sample work Here.

Peter Filardi's film Ricky6 has emerged from it's legal squabbles and has been playing the festival circuit and has been getting some nice reviews. Our old pal Hobbs and a buddy of his have done an official site, which includes the trailer for the film.

Well, I have finally decided what to do with my life. Military service! I've enlisted and am now private first class in the: 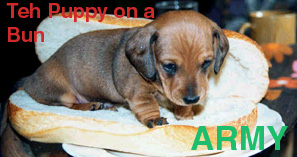